He survived the great battle at Barak Tor and sought refuge in his subterranean fortress beneath the fallen city of Kalos. Soon he will have recovered enough strength to lead his mutant retjrn in a vengeful attack against the Empire. You must journey across the barren Plains of Death and confront the Witch Lord.

His fortress is filled with legions of vile monsters and deadly traps. Time is short, brave Heroes.

The Witch Lord must be destroyed-once and for all. The future of the Empire is in your hands. Quest Book with 10 new quests US version has 10 small artifacts cards printed on the back cover. The Gate of Doom. The Halls of Vision. The Gate of Bellthor. Halls of the Dead. The Court of the Witch Lord. Return Of The Witclord was released in many countries and languages.

HeroQuest: Return of the Witch Lord | Board Game | BoardGameGeek

Australia, New Zealand, America. Here are some of the differences. A Is larger to accommodate larger quest book. 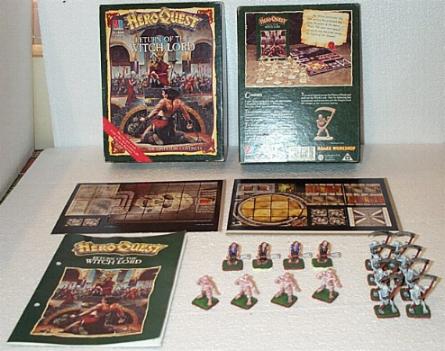 B Has a different color. D The story line is Different See Above.

A Is longer and not as wide. B It has a cardboard front and back cover.

C It has 10 small Artifact cards printed on the back cover. D The book is printed in color.

The quests are the same storyline But include artifact cards and of course the monsters have more than one body point.